On 15 October 2012, Rieter officially handed over the 4 000th C 60 Card to the Kipas company in Kahramanmaras. 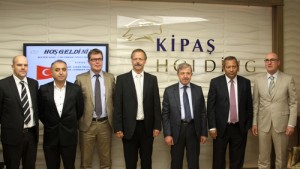 At an official handing-over ceremony, the 4 000th C 60 was presented to Kipas. The golden plaque was accepted by the CEO of Kipas Holding, Hanefi Öksüz, and its Vice President, Ibrahim Gümüser. In addition to the Kipas Management, the Rieter agency Erbel was represented and numerous journalists were present.

Kipas was founded in 1984. Since then, the company has experienced major growth and has thereby developed into one of the largest yarn manufacturers in Europe and the Middle East. Today the company, with 200 000 spindles and 20 500 rotors covering an area of 200 000 m2, produces yarns from cotton, viscose, linen, polyester and blends thereof in the count range Ne 5 to 150. Kipas relies completely on the technology of Rieter machines and consequently ensures the high quality of the yarns produced.

Kipas operates around 100 C 60s, which make a substantial contribution towards the company’s success. In this connection, an important factor is the high production rate with the achieved quality at comparably low operating costs. The basis of this convincing machine concept is formed by the 1.5 m working width which Rieter, as pioneer, launched onto the market around ten years’ ago. The results are the key to the success which Rieter has achieved in the whole of Turkey with its unique card.