The NH2 53 is an electronically controlled loom for the weaving of elastic and non-elastic narrow fabrics. Electronically controlled shedding takes place via linear motors mounted directly on the harness frames. These replace pattern chains and cam drums and permit both unlimited repeat lengths and pattern changes in minimum time. The weft and auxiliary thread transport, as well as the narrow fabric take-off and main drive are also all electronically controlled and infinitely adjustable. As compared to conventional needle looms, the NH2 53 is fitted with considerably fewer mechanical parts, which results in less wear and a reduction in energy consumption of around 35 per cent, i.e. max. 1 kW.

A maximum of sixteen harness frames are available for patterning.

The NH2 53 6/27 S2 SNO2B on display is used for the production of “Easy Bow” ribbon. This is a gift ribbon with a woven-in cord that is also manufactured on an NH2 53. Weft exchange technology (SNO2B) facilitates the simultaneous processing of two different weft colours. In addition, the ribbon is pushed evenly along the cord thus automatically forming a loop. This makes the wrapping of gifts and the formation of bows for bouquets far easier and faster. Indeed, “easy bows” serve as an attractive trimming for any type of present. 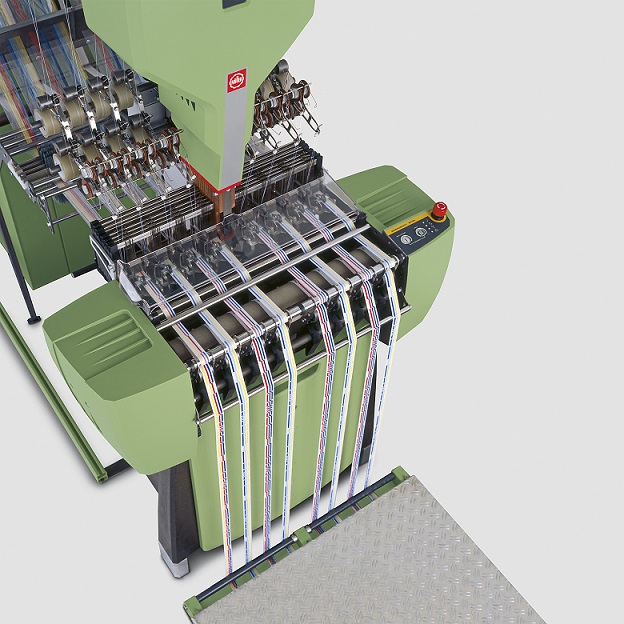 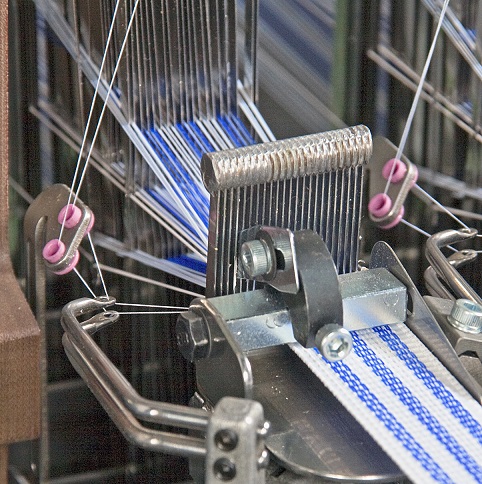 The NHJM2 53 6/42 Z4 narrow fabric loom is based on the successful NH2 53 and is fitted with an electronically controlled SPE3 384 jacquard machine.

The NHJM2 53 is ideal for the production of elastic and non-elastic tapes with woven, warp effect motifs such as names, logos and fashionable decorative elements. Additional patterning possibilities are provided by up to 384 hooks and eight electronically controlled healds.

The main drive unit consists of a brushless servomotor, which is located directly on the jacquard machine and powers both this and the loom via a toothed belt.

This new concept has been tailor-made for the NHJM2 53, as the power requirement of the jacquard machine is considerably greater than that of the loom. As a result the drive train of the loom is subject to lower loads, which has a beneficial influence on both wear and energy consumption levels. Furthermore, the new drive concept and the replacement of the mechanical control unit by an electronic system also provide a significant reduction in the energy requirement.

Another new feature is that the NHJM2 53 has the same heald geometry as that found in the proven NF series needle looms. In addition, the electronically controlled harness frame movement has been further developed with the result that the harness frames possess more power and thus greater stroke capacity. As a consequence, higher warp thread forces can be accepted than was the case in predecessor NH2 models. The electronic control of the healds, which are driven by linear motors, permits virtually unlimited repeat lengths (maximum pattern length: 6,300 weft insertions). Both the weft and auxiliary thread transports, as well as the tape take-off are electronically controlled and infinitely adjustable. Therefore, pattern changes can be carried out very quickly and simply via a handheld device.

Owing to its low energy consumption (< 2kW), the NHJM2 53 offers low-cost production, as great flexibility is available for the manufacture of various batch sizes.

The NHJM2 53 6/42 Z4 with SPE384 is able to weave an elastic tape, which when stretched reveals hidden lettering. You’re sure to be amazed by what appears!

At the same time, we will be presenting pattern switches via MÜCAD Direct Transfer. Using a LAN link, the NHJM2 53 loom is connected to the nearby MÜCAD workstation, which can be employed for on-the-spot changes to the concealed lettering in line with customer wishes. The altered logotypes can be transferred to a loom during the fair by means of the installed MÜCAD Direct Transfer optional software and after only a few minutes, the customer will receive the adapted tape pattern as requested.

Sustainability is one of the main topics of the ITMA 2015 and during product development in the run-up to the fair, Jakob Müller AG placed a special focus on the use of replenishable raw materials in the production of narrow fabrics. Accordingly, an elastic tape will be exhibited, which has a renewable material content of 90 per cent. As opposed to the polyester filament yarns employed to date, this woven tape has a very soft feel and offers pleasant wearer comfort. 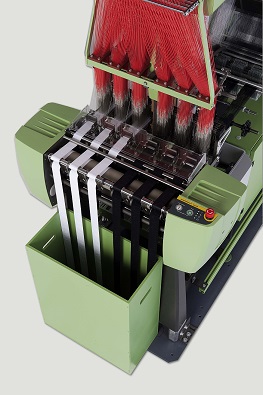