The further developed machine technology for recycling post-consumer plastics waste will be one of the topics of the presentation of Herbold Meckesheim GmbH at this year‘s FAKUMA in Friedrichshafen.

The Herbold Wet Shredder HGM, ideal for processing bulk and bale-shaped waste by adding water as early as the first pre-size-reduction step, will be on display. In fact, wet grinding is not new when contaminated plastics waste is recycled; so far, however, it was only used with granulators. The aspect has been neglected so far, however, that good results can also be obtained with shredders by adding water. Especially with highly abrasive waste such as agricultural films even during the very first recycling steps a surprisingly efficient elimination of the contamination can be achieved. Directly after the shredder, due to the addition of water, a great amount of the dissolved surface contamination can be separated.
The efficiency of downstream units is thus increased. There is not only less wear on the shredder itself due to the fact that downstream units have to cope with less contamination, but this also means increased efficiency and less wear in regard to downstream units.
For the time being, two machine sizes are available with working width of 1450 and 2000 mm respectively, others will follow.

For an efficient separation of foreign bodies from pre-shredded post-consumer material, the Herbold Prewashing Unit VWE 600 (patent pending) will be presented: in three process steps, sediments are separated and surface contamination rinsed off due to water injection. 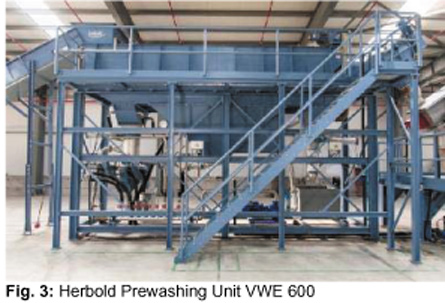 With the Herbold Plastcompactor further emphasis is placed on compacting. More and more frequently, a plastcompactor is used downstream of a washing/separation unit due to its convincing advantages, as part of which can be mentioned the mixing and homogenizing of big charges.
The agglomerated material shows excellent flow properties and a high bulk density. As a side product, the agglomeration process achieves an efficient separation of residual humidity. HERBOLD plastcompactors are available for throughputs of up to 1500 g/h. 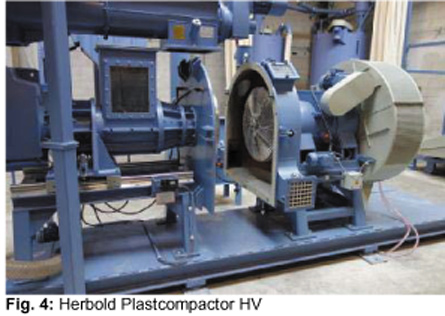 The patented Herbold Granulator of the SB Series has been further developed and is available in 6 different sizes with throughputs of up to 6000kg/h. Especially for bottle recycling, but also for pre-size-reduced waste, the forced feeding device with feed screws is particularly efficient, energy-saving and compact in regard to space requirements. It is possible to achieve throughputs increased by 30% and an energy saving in the same amount. 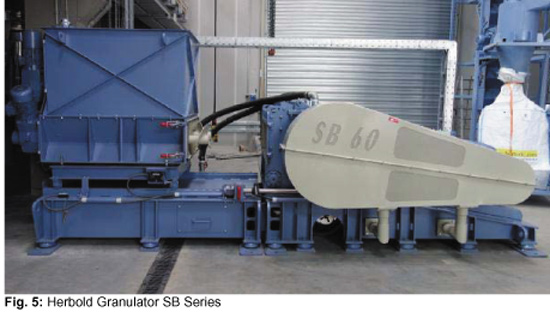