Since its development in 1967 it was known as the most flexible rapier weaving machine in the world: the P1 made by Lindauer DORNIER GmbH. At the upcoming ITMA (20.–26.6., Barcelona) the company will present the standard variant of its successor, the P2 to the public for the first time. It is already being hailed as a new milestone in rapier technology.

“Even more flexible, faster and more efficient – the P2 is the result of almost seven decades of expertise in developing and building rapier weaving machines”, says Thomas Laukamp, DORNIER’s Weaving Machine Predevelopment Manager. He goes on to say that with this latest innovation from DORNIER the already excellent P1 has been decisively improved in every aspect of importance to the weaver. Accordingly, with its improved shed geometry and more rigid frame, better insertion performance, maintenance-free drive (developed in-house) and optimized positive active center transfer, the P2 henceforth replaces the P1 as the most flexible rapier weaving machine in the world.

Even the dimensions of the machine have been optimized: The new P2 is as much as 240 millimeters shorter and 40 millimeters lower than its predecessor. “That might not sound like much, but it simplifies operation of the machine enormously”, declares Laukamp. Furthermore, the P2 machine structure consists of clearly defined primary and auxiliary modules. This module-based construction principle is intended above all to make conversion and expansion work simpler. “This in turn assures the user greater investment security, because he can respond more rapidly to changes in the market”, says Laukamp.

The P2 can be adapted easily and quickly for processing different yarns for clothing, home and technical textiles as well as for high-quality composite semi-finished materials. The central module in frame construction is 75 percent more rigid than the P1 and is also designed for optimum force flow. The torsional rigidity of the reed shaft has been increased by 50 percent to lend more stability to the weaving process. 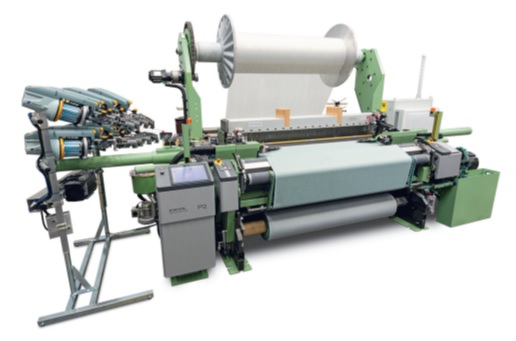 Whether it is used with cam motion, dobby (up to 24 shafts) or Jacquard machines with up to 30,000 hooks and in conjunction with the EasyLeno® leno system developed by DORNIER – with up to 16 filling thread colors the P2 is the ideal tool for creative, flexible, precise and efficient production of top quality clothing and home textiles or technical textiles in glass, carbon or aramid.

The new machine is available in three variants: Besides the standard configuration, the P2V is a reinforced version offering a reed beat-up force as much as 37 kN, and the P2S heavy-duty weaving machine is supplied with a maximum reed beat-up force of 50 kN for very heavy and dense technical fabrics. Like all weaving machines from DORNIER, all variants of the P2 are equipped with high-performance interfaces so they can be integrated easily in the IT/tool environments in the weaving mills.